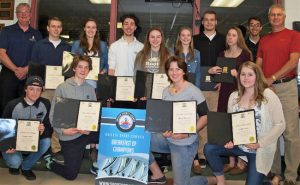 Successful, hard-working local high school athletes were celebrated by the Orillia Sport Council at its fourth annual Breakfast of Champions Thursday morning at Bayside Restaurant. The students were also schooled about Orillia’s rich sports heritage by one of this city’s pre-eminent athletes, Rob Town.

The only two-time winner of Orillia’s Athlete of the Year Award, Town, who is being inducted into the Orillia Sports Hall of Fame Saturday night, exhorted the local athletes to work hard and to be thankful for their opportunities.

“I think when you’re an athlete you never really appreciate your coaches enough,” said Town. “When I was thinking of a message for you guys, it was this: Cherish your coaches because they don’t have to do it. They give you advice, they help you achieve success and that experience, as a young athlete, can help you in the future with whatever you do. That experience as an athlete can be life changing.”

Town speaks from experience. After discovering hockey was not his sport – though he still remembers the two goals he scored when he played at the all-star level as a 10-year-old – Town turned to swimming and has fond memories of training at the old Peter Street YMCA and its 50-foot pool now home to Pauline Barratt Aquatics.

“It was a tiny little tub of a pool,” recalled Town, noting 20 swimmers completing laps in its narrow six lanes often had to turn sideways to avoid contact. “But out of that little pool, as a 12-year-old, I became an Ontario champion and set three Canadian records.”

But Town found swimming boring and as he hit his teen years, he did not relish 6 a.m. practices. So, when he started high school at ODCVI, he tried other sports, excelling in both volleyball and basketball before really hitting his stride as a member of the track and field team. He became a thrower of renown, hurtling the javelin, shot put and discus further than any of his vintage. In fact, 45 years later, he still holds a provincial high-school discus record.

During this time, he fell in love with the decathlon and became one of the world’s best in the grueling 10-sport event. He finished sixth at his first Canada Games in 1976, improved the following year in Newfoundland and then represented his country at the Commonwealth Games in 1978. When he went to the University of Waterloo, he focused on getting into its optometry program in Year 1 but after that, much of his focus was on his athletic pursuits and his goal of competing at the Olympics.

“I thought maybe I had what it takes to get to the Olympics, so I took a year off from school and moved to Toronto to train,” said Town. But fate was not in his favour. Canada and other western nations opted to boycott the Moscow Olympics of 1980. As the reigning national indoor champion, the news was devastating. It got worse. At the national championship, with an insurmountable lead, the decathlete tore the cartilage in his knee.

After recovering, he set his sights on qualifying for the 1984 Olympics. He soon broke his elbow training for the pole vault and later tore his hamstring. At the Olympic-qualifier, however, he felt he had regained his form but in the final event, he knew he needed to run his fastest-ever time and fell agonizingly short. “But I was the Canadian champ and there was lots to be proud of,” Town said.

He told the local students he credited his success to hard work, good genes and the help he received along the way from various coaches. “I had a swim coach as a 10-year-old who introduced us to interval training which was innovative at that time,” said Town. “In high school, I had a track coach that motivated me to break records and encouraged me to get in the weight room… and a basketball coach that developed in us an attitude that even though we were a team from small-town Orillia, we could beat anyone. I had a hurdles coach at university who introduced us to a speed ball, circuit training and running sand hills.”

Town encouraged the local athletes to take time to thank their coaches. “I appreciate the quality coaches that helped me along the way,” he said. “I appreciate all that Orillia has done for me. I’m proud to be an Orillia boy.”

Orillia mayor Steve Clarke, who lamented his many track and field defeats against Town when the two were student rivals, said Town is an example of perseverance and a worthy role model.

“When you participate in athletics in high school and university, you learn to be competitive in a healthy way: to win and lose gracefully,” said Clarke. “I have often used that in business and family situations to overcome adversity and to prepare for the next challenge. As (Town shared), when you get knocked down, don’t quit — that’s a lesson that will put you in great stead the rest of your life.”

Clarke presented certificates to 12 students – three from each of the local high schools – who were chosen by their schools to be recognized at the Breakfast of Champions. The students also received custom hoodies courtesy of Artech and, thanks to a donation from Casino Rama Cares and Sport Orillia, the students can attend Saturday night’s sold-out Hall of Fame Gala for free.