Twelve students from Orillia’s three secondary schools were feted Thursday at the annual Breakfast of Champions hosted by Sport Orillia.

“This has become an annual event that we’re really proud of,” said Martino di Sabatino, president of Sport Orillia. “It’s really important to us to honour our local student athletes and we hope someday, we’ll see some of these athletes inducted into Orillia’s Sports Hall of Fame.”

The annual breakfast is always held the week of the Orillia Sports Hall of Fame Gala. This year’s annual event is slated for Saturday night at Casino Rama.

Four Orillians – two athletes and two builders – will be inducted into the city’s sports shrine as part of the Class of 2018.

Three of those inductees – Ken ‘Jiggs’ McDonald, Jayme Davis and Brittney Fess – were on hand Thursday morning to help recognize the student athletes.

McDonald, the event’s guest speaker, regaled the audience at the Best Western Mariposa Inn with stories of his legendary NHL broadcasting career and told tales about the legends he rubbed shoulders with on a daily basis over his 50-year TV run that included stints with the New York Islanders, Atlanta Flames, Florida Panthers and Toronto Maple Leafs.

But he also reminded the young athletes about being true to themselves, stressing the value of hard work, dedication and being a team player.

In remembering his radio career at Orillia’s CFOR, he urged the students to remember their roots and to appreciate those who help them along their journey.

Joining McDonald in the builder’s category in this year’s group of inductees is Toben Sutherland, who coached Canada’s slope-style skiers at the Winter Olympics.

Sutherland, a star on the World Cup circuit as a freestyle skier who was Orillia’s athlete of the year in 1992, began coaching in 2002. In 2011, he co-founded the Canadian slope style ski team and was head coach of the team that won gold and bronze in Sochi.

Jayme Davis (Beard) and Brittney Fess (Boynton) are local women’s field lacrosse pioneers. They grew up playing the sport together and both played for their country at national and world championships and also shone at the post-secondary level.

The following students were honoured for their athletic and academic achievements: 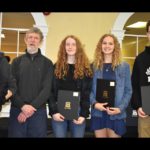 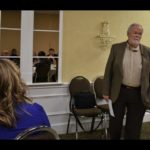 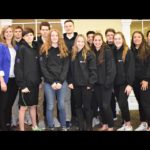 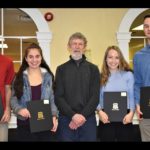 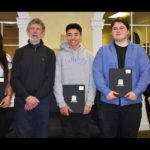