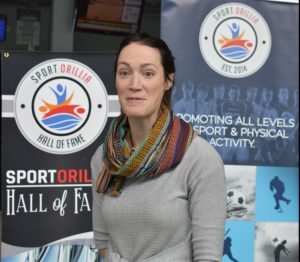 As young girls, Jayme Davis (Beard) and Brittney Fess (Boynton) fell in love with what was then a new sport in Orillia: field lacrosse. They grew up together playing in the fledgling Orillia Lady Kings house league program on a makeshift baseball field at the Lion’s Oval and, using a blend of natural athleticism, determination and hard work, became two of Canada’s best.

So, it is perhaps fitting that these dynamic two athletes, trailblazers in their sport, will go into the Orillia Sports Hall of Fame together in April.

At a press conference Friday morning, Sport Orillia announced Davis and Fess have been selected to enter the city’s sports shrine at its April Gala. Two ‘builders’ will join them: NHL Hall of Fame broadcaster Ken ‘Jiggs’ McDonald and slope ski pioneer Toben Sutherland, who will be coaching in his second straight Winter Olympics later this month.

Davis was the lone inductee able to attend the media event. “I am honoured to join some really great athletes and individuals,” she said, adding she was glad to be joining 2015 inductee Elaine Thompson, the only other woman in the hall. “It’s neat because she was my swim coach when I was young. And to have this honour with one of my best friends … it’s pretty neat.”

Davis, who played several sports going growing up, said she was thankful for how sports, and especially lacrosse, opened doors for her. She played for Canada at the 2003 and 2007 World Field Lacrosse Championships and went on to play one season of women’s field lacrosse (2007) at Wilfrid Laurier University. That season, she won OUA rookie-of-the-year honours and was also named a first-team all-star. She earned the 2017 Orillia Athlete of the Year Award.

She earned a scholarship to play at Ohio State University, where she was a star player. With Fess, she helped raise more than $50,000 locally through Lax for a Cure, a fundraiser they started. Her love of sports has also shaped her career; she helps administer high school sports for the Simcoe Muskoka Catholic District School Board.

Right now, however, she is on maternity leave, caring for her first child. “I’m working on my career, working on being a mom, but when I got the call (about being inducted) it was really nice,” she said. “I think this might top things. I’ve had a lot of different experiences and different successes, but this maybe sums up everything. It’s hard to find words … it’s very special.”

Fess followed a similar path. In 2002, she won the Joanne Stanga Award as the outstanding lacrosse player in Orillia and then played for Canada at the 2003 world championship. She, too, went to Laurier and was team captain in 2007 and 2008. She was a starting defender and midfielder from 2005 to 2008. In 2007, she was the OUA’s most valuable defensive player and was named a first-team all-star twice.

John Mayo, who helped start the women’s field lacrosse program in Orillia and is now the sport’s provincial commissioner, said both are deserving of the call to the hall. “Jayme and Britney are two elite athletes that have been participants, coaches and builders for the sport of women’s field lacrosse,” said Mayo. “They are both truly outstanding candidates to enter the Orillia Sports Hall of Fame.”

Joining the duo is Sutherland, who is busy preparing for the Winter Olympics. The former aerial skiing star is now the head coach of Canada’s slope style team and spoke to press conference participants via FaceTime.

“It means a lot to me,” Sutherland said of being inducted. “I’m honoured and really appreciate all the support from the city over the years.”

Sutherland, a star on the World Cup circuit as a freestyle skier, who was named Orillia’s athlete of the year in 1992, turned to coaching in 2002 when he worked with the national development aerial team. He was the head coach of the Ontario Park and Pipe Team from 2008 to 2011. In 2011, he co-founded the Canadian slope style ski team and was head coach of the team that won gold and bronze in Sochi. He also has high hopes for this year’s team.

While he would have loved to represent Canada as an athlete – the sport wasn’t recognized when he competed – he is happy he can go as a coach. “I’m proud of being a builder and being able to pass on my experience as an athlete to my athletes,” he said. “And as a coach, I have seven chances at winning a medal. As an athlete you only have one.”

Sutherland said being inducted into Orillia’s sports shrine is comparable to the memorable moment in Sochi when his athlete, Huntsville’s Dara Howell, won Olympic gold. “It’s up there with the gold,” he said. “For me, personally, it’s a professional accomplishment and something I’m very proud of.”

McDonald came to Orillia in 1958 to work at CFOR, where he became a popular sports announcer. When the NHL expanded, he was hired by the Los Angeles Kings as their play-by- play man (1967-72) and then went on to work for the New York Islanders, Atlanta Flames, Florida Panthers and Toronto Maples Leafs. He won the Foster Hewitt Award in 1990 and is in the NHL Hall of Fame.

“Having never had any athletic ability to speak of, I am humbled by this honour,” McDonald told OrilliaMatters from Florida. “It was people like Pete McGarvey and Gordon E. Smith who allowed me to be as creative as possible during my years at CFOR. Without their support and the air time provided, my play-by-play career would never have happened. I owe it all to those nine years working in Orillia radio.“

The four new honourees will be officially inducted at the 2018 Orillia Sports Hall of Fame Gala, which will be held April 21 at Casino Rama. Tickets are $75. 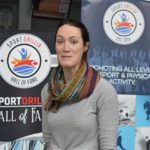 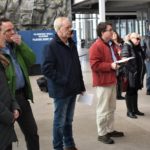