The upcoming Sport Orillia Hall of Fame Dinner is scheduled for Saturday May 28th, 2022. Nominations are now open for the class of 2021.

Our class of 2020 –  Dave Town, Bill Watters and Wayne Dowswell will be formally honoured this spring as well.

BILL WATTERS
Bill Watters is also entering the shrine as a builder, though he was a star athlete first at ODCVI and then at the University of Toronto. Upon graduation, he became an NHL player agent and broadcaster. He also ran the Orr Walton Sports Camp and was instrumental in it being located in Orillia.

From 1991 to 2003, he was the assistant general manager of the Toronto Maple Leafs and was also a founder and part-owner of the Toronto Rock National Lacrosse League team. He went on to help start the Ottawa Renegades CFL team and was instrumental in creating that team’s ownership group.

WAYNE DOWSWELL
Wayne Dowswell, who is being inducted as a builder, helped build strong, winning traditions in both wrestling and weight lifting in Orillia.

He started a weight-lifting club at the school before the board shut it down. He moved the club to the YMCA and then built the ‘Muscle Barn’ on his farm which is still going strong at another venue.

His wrestlers and weight-lifters shone on local, provincial and national stages and his influence continues to be felt as many of his former athletes have taken up the mantle and now coach young wrestlers.

DAVE TOWN
Dave Town is being inducted as an athlete and he was – and remains – one of Orillia’s finest. Town was an elite swimmer who dominated the sport locally and provincially. He won seven gold medals at the CIAU championships for the University of Toronto (1979-84), struck gold at the Canada Games (1981) and nearly made Canada’s Olympic team in 1984. Town continues to be a top-ranked swimmer; he has more than 60 Canadian and four world records in masters swimming and is a long-time coach of Orillia’s masters swimmers. 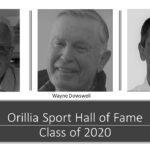