‘Nobody ever becomes a champion on their own,’ said Mark Shivers who was inducted alongside Nelson Dunlop, Bill Smith, Joanne Stanga, Wayne Dowswell, Bill Watters, and Dave Town.

Former Orillia Athlete of the Year Mark Shivers headlined the class of 2021. He was inducted alongside builders Nelson Dunlop, Bill Smith, and Joanne Stanga who were instrumental, respectively, in growing baseball, lacrosse, and hockey in Orillia over many decades.

Shivers, who got his swimming start with the Orillia Channel Cats, went on to become an elite swimmer throughout the 1990s and early 2000s. In 2002, Shivers became a national champion in the 50 butterfly.

Shivers credited support from his family, saying his older brother, Todd, was his first swim teacher at the family home along the shores of the Narrows in Atherley.

“You then became my biggest supporter and biggest fan during the prime of my sport,” Shivers, fighting back emotions, said to his brother. “You ignited the competitive fire in me at a young age, and you still know to this day as to when that fire needs a little stoking.”

Shivers attributed his success to growing up in Orillia where he had plenty of great coaches and supporters.

“Nobody ever becomes a champion on their own,” he said. “I was so lucky to have great coaches throughout my athletic career.”

Nels Dunlop dedicated his life to baseball in Orillia as a coach, umpire, and manager. Dunlop was a pioneer in building the foundation for Orillia Legion Minor Baseball and created the house league program in the mid-1950s. Speaking on behalf of his late father was Dunlop’s son, Mick.

“He had simple philosophies,” he said. “He taught people to learn to believe in themselves.”

Dunlop says his father coached a lot of average players throughout the years but got the best out of each one of them.

“The sport maybe would have survived without him, but he went for decades,” he said. “He just loved the game of baseball.”

Bill Smith purchased the Orillia Travelways in 1979 and elevated the team to Tier 2 junior hockey. The team won the Centennial Cup in 1985 and was a perennial contender during his tenure as owner. Smith was also a part of the ownership group of the Toronto Rock that won five NLL championships from 1999 to 2005.

Smith said it was a “true honour” to be inducted into the Orillia Sports Hall of Fame. He credits volunteers for helping him field successful sports teams during his career.

“In all sports, it’s not the owner that makes the difference in a team or your paid help,” he said. “It’s the volunteers that come out and support the team. Without them, no sports organization would be successful.”

Reflecting on the Travelways days, Smith says they were some of the best times of his life. He says none of it would have been possible without the support of his family.

“We had some great teams,” he said. “My family supported me through all this bulls**t and I’m surprised they did,” he quipped.

Joanne Stanga, a member of the Ontario Lacrosse Hall of Fame, is one of the pioneers behind women’s lacrosse in Ontario. She worked tirelessly to develop the sport for girls in Orillia and other Ontario communities before becoming a provincial and national champion as a coach.

To see that the Orillia Lady Kings has grown into an organization that produces world-class talent makes Stanga incredibly proud.

“Here is hoping that someday the little Lady Kings, those cute little five-, six-, and seven-year-olds are going to grow up and play in the Olympics,” she said. “You’ve got to start somewhere.”

Stanga says hard work pays off, but she wouldn’t have had success without the support of her family and the Orillia community.

“They are always there to guide, support, and inspire us,” she said. “You are responsible for me being involved in sport. From the bottom of my heart, thank you.”

The ‘Class of 2020′ — Wayne Dowswell, Bill Watters, and Dave Town — was also inducted into the Hall of Fame on Saturday night as last year’s ceremony was cancelled due to the COVID-19 pandemic.

Dowswell’s wife, Alice, spoke on his behalf during Saturday night’s ceremony and shared a story of when the coach would innovate new wrestling moves at home.

“I was Wayne’s grappling partner any time he had a new wrestling move to teach,” she said while the sold-out crowd at Hawk Ridge Golf Club erupted in laughter. “One time we were practising the hip throw onto a bed and my foot went through the wall. Our son had a playmate over who went home and told his parents that Mr. Dowswell threw Mrs. Dowswell through the wall.”

Watters was a star athlete at Orillia District Collegiate and Vocational Institute and the University of Toronto before becoming an NHL player agent, a broadcaster, and the assistant general manager of the Toronto Maple Leafs. Watters was also part owner of the Toronto Rock and helped start the Ottawa Renegades of the CFL.

“I’ve had some good fortune,” he said. “I’ve always prepared myself for when opportunities arrived, and I was strong enough to accept them and do the best I could with them.”

Watters attributed his career success to his early life in Orillia where he built relationships and worked hard.

“Orillia was a big part of my life,” he said. “When I think of the good fortune that I’ve had, I attribute it a lot to the city of Orillia. I’ve never forgotten it, and I thank all of you for what you have done for me in that regard.”

Town joined Shivers as a fellow swimmer and the only other inductee going into the hall of fame under the athlete category on Saturday night.

“I got to represent Canada internationally four times,” he said. “I was really fortunate that at one meet I actually got to get up on the podium and see the Canadian flag raised.”

Town says being inducted into the Orillia Sports Hall of Fame is a great honour. As a researcher and local historian, he knows just how many great athletes are still waiting in line to share the honour.

“Eventually I’m going to start nominating these guys from 100 years ago who are pretty awesome,” he said. 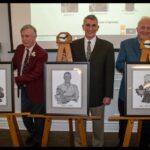 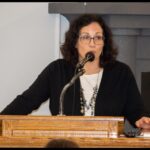 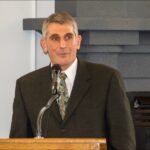 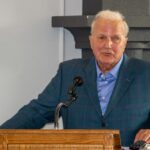 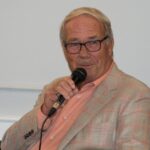 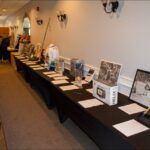 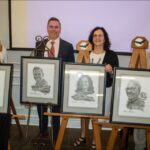