Look who is being inducted into Orillia’s Sports Hall of Fame! 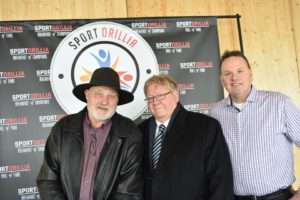 The trio includes hockey star Stuart Burnie and a pair of builders who were co-founders, architects and supporters of the Orillia Terriers senior hockey team that won the Allan Cup in 1973: Don Stoutt and Bill McGill.

Last year, as part of the city’s sesquicentennial celebration, Burnie was named as one of the top 10 players to ever come out of Orillia. He is also a charter member of the Orillia Hockey Wall of Fame.

He said he traces the roots of his success to the foundation that was built in Orillia where he was helped by many local coaches and families that supported him on his path.

“I do appreciate all the support I’ve been given and all the great coaches I had along the way,” said Burnie, a long-time teacher at Harriett Todd Public School. “It was a community of support. I think of families like the Wilkies, the Grubes, Knoxes, Shropshires, my parents … they were all part of the team.”

Stoutt also said he was “honoured and humbled” to be chosen as a Hall of Famer. But he deflected the praise, saying it’s the Canadian championship Terriers that should be in the local shrine.

The long-time local real estate broker said he remains “very proud” of what that team accomplished. They were a David in a fight with Goliath all the time.

“We were a small community and couldn’t play with the big dogs,” said Stoutt. “We had to raise a lot of money to keep the team going.”

He said it was a marathon of beer fests, advertising selling, program hawking and other initiatives. “It was a community effort. We stuck together and were quite successful.”

It was Stout and Bill McGill that co-founded the Terriers, one of the country’s top senior hockey teams of its era. And that was an era when senior hockey was excellent; many former NHLers played in the league and took it as seriously as if it was pro hockey.

Thom McGill said Orillia’s Terriers were only successful because of the efforts of people like his dad, who died in 2001, Stoutt and a giving community.

“The easy part is the players who show up and play,” said Thom McGill. “I don’t think a lot of people appreciate what goes into running a hockey team. The hours they put in … it was incredible.”

McGill admits he wondered if this day of recognition might come for his late father. After all, it’s been decades since his dad’s fingerprints covered most of the things that happened in Orillia.

In fact, if his dad were still alive, Thom thinks he might have said: “Where the Hell were you 25 years ago?” he joked. “He would have just taken it all in stride.”

For Burnie, the accolade is recognition of an incredible athletic legacy.

Burnie was one of the best lacrosse players of his era, starring for the former Orillia Colonels. In 1983, he led the Ontario Jr. B League in scoring – one of just four Orillia players to do so in the league’s 46-year history.

He once scored 12 goals in a game, adding one assist, prompting a teammate to nickname him ‘Reggie’ after NHL sniper Reggie Leach.

In his final year of junior hockey and first year at the Tier II level, Burnie excelled, scoring 55 goals in 46 games for the Orillia Travelways. That year, he won the Doc McKinnon trophy as the most valuable player in Orillia at the junior level.

His offensive prowess catapulted him on to the radar of many NCAA teams. He chose Western Michigan, where he shone.

In 159 games, he scored 102 goals and had 72 assists. During his four years, the team went from a non-playoff team to the final eight in his last year, playing in front of sell-out crowds at Joe Louis Arena.

Moments after losing in the NCAA Final 8, Burnie received a call he will never forget.

“Over long periods of time, you forget things, but the day I was asked to play for Team Canada I remember well,” Burnie recalled at Tuesday’s press conference.

Burnie was in a hotel room in Boston with his parents when Wayne Fleming, who was on the Team Canada executive, asked Burnie to fly to North Bay to suit up for the national team for the final three games of their eight-game series against Russia.

After losing the first seven games against their bitter rivals, the final game of the series was played at Copps Coliseum in Hamilton. That night, with upwards of 30 friends and family members in the crowd, Burnie netted three goals and led his team to a thrilling victory.

To this day, one of his most prized possessions is a silver stein emblazoned with the Hockey Canada logo, declaring Burnie the player of the game that night.

“That is a special memory,” said Burnie. “Wearing that flag on your chest … it’s an incredible experience that is hard to duplicate.”

Burnie also went on to play in the AHL, signed a two-year deal with the New York Islanders and scored during exhibition play with the NHL club.

Thom McGill (on his father’s behalf), Stoutt and Burnie will officially be inducted into the Orillia Sports Hall of Fame at a gala dinner and ceremony April 27 at Casino Rama.

“We encourage people to come out to the gala and learn about these great Orillians, to hear about their successes and to get a sense of the heritage of this great sports city,” said Martino DiSabatino, president of Sport Orillia.