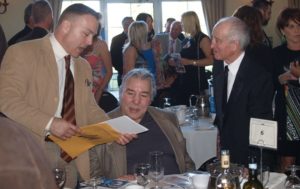 George Chuvalo, centre, chats with his son and Walter Henry, right, who was in the inaugural class of inductees to Orillia’s Sports Hall of Fame. The 2018 class will be announced Friday. Dave Dawson/OrilliaMatters

Two amazing athletes and two trail-blazing builders will be enshrined into the Orillia Sports Hall of Fame later this year.

“We are thrilled to add two incredibly talented female lacrosse players and two men who were pioneers in two very different fields,” said Martino DiSabatino, chair of the Hall of Fame Committee. “These four individuals are proud Orillians and we are proud to have the opportunity to recognize their achievements.”

The Orillia Sports Hall of Fame was created by Sport Orillia, a grass-roots, volunteer-led organization that originated in 2013. Sport Orillia is a hub for all things sport whose mission is to enhance the economic, social and personal health of Orillia residents through sport and active living.

To find out who will join them, we invite you to a media conference at 11 a.m. on Friday, Feb. 2 at Rotary Place. You can meet the athlete(s) and learn what makes these four Orillians deserving members of the Orillia Sports Hall of Fame.

The four new honourees will be officially inducted at the 2018 Orillia Sports Hall of Fame Gala, which will be held Apr. 21 at Casino Rama. Tickets are $75.