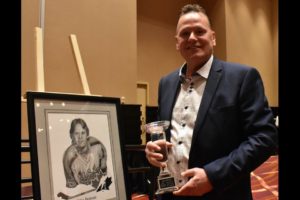 One of Orillia’s finest hockey players and two men who helped build a national champion hockey team were inducted into the Orillia Sports Hall of Fame Saturday night.

Don Stoutt and the late Bill McGill were inducted into the builder’s category of Orillia’s sports shrine, while Stu Burnie joins a star-studded roster of athletes in the hallowed hall.

“Orillia is an incredible community to be a part of as a young athlete,” said Burnie in his acceptance speech at the gala event at Casino Rama. “I’m incredibly grateful to have been lucky enough to have grown up here.”

Burnie attributes his success to growing up in Orillia – to the dedication and support of his parents, to the countless local coaches who invested their time and energy into him and to a life-long group of friends that would often show up at arenas around North America to watch him play.

There was one “defining moment” that altered his course and put him on the path to success.

In 1981, the Orillia Travelways were purchased by Gerry Smith, Barney Clarke and Bill Smith and they moved the team from Jr. B to Jr. A.

That was a turning point; it meant scouts were often in Orillia and it elevated the team into the upper echelon of junior hockey at that time.

Burnie had a breakout offensive year that season. But as a new team, the Travelways were struggling and weren’t going to make the playoffs.

“Bill Smith called me into his office and offered to trade me to a playoff team,” recalled Burnie. “I said no. I felt like it was jumping ship.”

The next day, Smith called Burnie back to his office. He told the high-scoring right winger he had traded him to the Brampton Warriors.

“You will thank me later,” Smith told him.

On Saturday night, Burnie did just that, publicly thanking Smith for forcing him outside his comfort zone.

That trade opened doors and opened the eyes of scouts. He earned a full scholarship to play NCAA Division 1 hockey in Western Michigan University.

There, he took a mediocre team to a CCHA championship. To this day, the team’s 32-win season in Burnie’s final year remains the best season in the school’s history. Burnie still holds four individual scoring records and is still among the top five all-time scorers for the Broncos.

One of his teammates during that time was future NHL goalie Glenn Healy. He sent an audio message that was played Saturday night in which he recalled fond memories of a Broncos’ team trip to Orillia in 1983.

“You are a great athlete, a great teammate at Western Michigan and certainly you’ve made a big impact in the community of Orillia,” said Healy of the “well-deserved” honour.

He called Burnie “one of the stars of Orillia” and thanked him “for being a great person.”

Another former Broncos’ teammate, Chris MacDonald, in a video tribute, recalled Burnie’s love for his hometown.

He said Burnie had “a giant Canadian map on his wall with Orillia marked on it. He made it very clear he was very proud guy from Orillia,” said MacDonald, now an amateur scout for the Vancouver Canucks.

“He listened to a lot of Gordon Lightfoot music, told us all about Lake Couchiching, Lake Simcoe, Big Chute and Big Chief and all the cool things about Orillia,” said MacDonald with a chuckle.

He said the team’s trip to Orillia was memorable and added he “couldn’t be prouder” of Burnie for this recognition and for the respected teacher he has become.

While their “dream” season in Michigan didn’t end the way they had hoped when they were upset by Harvard in the playoffs, that didn’t seem to matter to Team Canada.

Burnie was asked to play for his country in the final three games of an eight-game series against Russia. He jumped at the opportunity.

After losses in North Bay and Ottawa, Canada was to play Russia in the finale at Copp’s Coliseum in Hamilton. It was a magical night.

With the stands packed – including a large contingent from Orillia – Burnie netted a hat trick, was named the game’s MVP and Canada finally bested their rivals.

“That was one of my most memorable hockey moments,” said Burnie.

After his collegiate career, Burnie signed with the New York Islanders and has fond memories of scoring an exhibition season goal against Rangers netminder John Vanbiesbrouck.

“I still have (that puck) today,” said Burnie, who noted while it was an exhibition game “for a 170- pound kid from Orillia, it felt like a Stanley Cup goal. It’s still very special to me.”

He went on to play four seasons of professional hockey and a year in Europe playing in the Finnish Elite League.

He played with and lived with Bruce Boudreau, current coach of the NHL’s Minnesota Wild, for three years during his AHL and IHL career.

“You are a great athlete, a great winger for me and I loved every minute living with you,” Boudreau said in a video message played Saturday night. He said the honour for his “great friend (was) well deserved.”

Collins explained how Stoutt, at the age of 27, became president of the fledgling Orillia Terriers and how he worked tirelessly, investing time, effort and cash to turn the team into a champion.

The crowning glory came with the 1973 Allan Cup championship, won on home ice at the Orillia Community Centre.

Collins, who was the hockey team’s doctor, noted Stoutt also bankrolled and organized a team trip to Sweden, talked about how Stoutt founded the Kinsmen Hockey School and continues to sponsor local sports teams and has helped raise $300,000 for the Children’s Miracle Network through golf tournaments.

Collins called Stoutt “a perfect candidate” for the hall of fame. That was a sentiment echoed by Darryl Sittler, the Toronto Maple Leafs legend who has called Orillia home for decades.

“This is well deserved,” Sittler said in a video message in which he said he was “proud to be part” of the Kinsmen Hockey School.

“It doesn’t get any better than (winning the Allan Cup),” said Sittler. “You’re a good man and I’m happy for you.”

Stoutt said he was “humbled” by the recognition and praised “all the people that helped me” along the way.

“I’m very pleased to be part of the Hall of Fame and the Orillia sports community,” he said to a standing ovation.

McGill, who died in 2001, was nominated by John Falcon, who talked about the well-known Orillian’s athletic feats as a lacrosse and rugby player.

But it was his role as a founder of the Orillia Terriers and booster of all things Orillia that landed him in the Hall of Fame as a builder.

Falcon talked about the lengths McGill went to in his quest to put the Terriers on the map and recalled how the fun-loving McGill would regale people at the Legion with stories and jokes.

“He was a very funny man. He loved people and was just a great person,” said Falcon.

His son, Thom McGill, accepted the award on behalf of his father.

“I often thought people might forget my dad and Don (Stoutt) … it was a whole different era a long time ago,” said Thom. “This is quite an honour for our family.”

At Saturday night’s event, 2018 Orillia Athlete of the Year Annie Lloyd was recognized. She was joined in the audience by previous inductees Walter Henry, Cam Devine, Terry Bullen, Jayme Davis, Brittney Fess and, on behalf of the late Jerry Udell, Brenda Udell.

There are now 20 inductees in the Orillia Sports Hall of Fame. 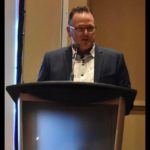 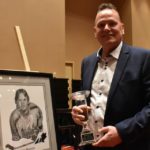 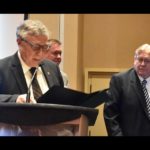 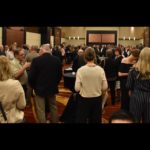 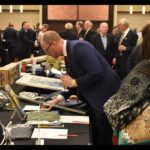 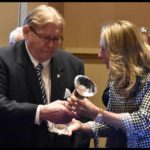 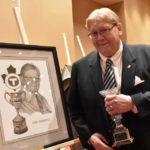 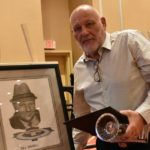 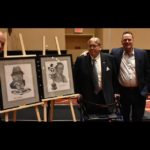